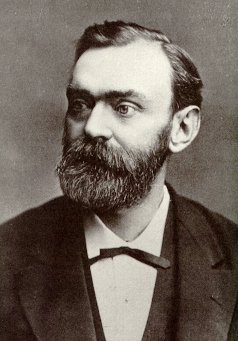 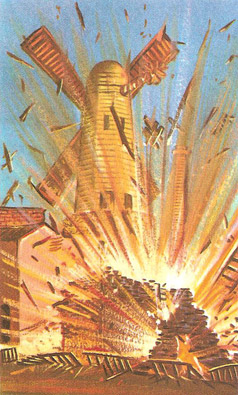 Artist's impression of the explosion at the Nobels' workshop near Stockholm in which Alfred's youngest brother was among those killed. 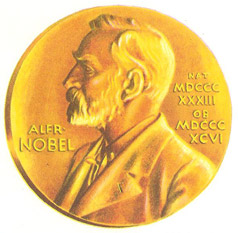 Alfred Nobel was a Swedish-born inventor of dynamite and other explosives. About 1863 he set up a factory to manufacture liquid nitroglycerin, but wen in 1864 this blew up, killing his younger brother, Nobel set out to find safe handling methods for the substance, so discovering dynamite, patented in 1867 (UK) and 1868 (US). Later he invented gelignite (patented 1876) and ballistite (1888). A lifelong pacifist, he wished his explosives to be used solely for peaceful purposes, and was much embittered by their military use. He left most of his fortune for the establishment of the Nobel Foundation and this fund has been used to award Nobel Prizes since 1901.

Nobel was born in Stockholm on October 21, 1833. His father, Immanuel, came from a poor peasant background and worked his way to fame as a military engineer. In 1842 he took his family to Russia where he began making land and sea mines which he supplied to the Russian government.

Like his two older brothers Robert and Ludwig, Alfred was schooled at home by private tutors. As a young man he spent about one year in the United States to study under Swiss engineer John Ericsson. Returning to Europe, he soon made a name for himself as an inventor. Besides, he had a share in the oil business of his brothers who had opened up the Baku oil fields in South Russia.

Together with his father, who had also returned to Sweden, Alfred Nobel now began experimenting with explosives. At Helenborg, near Stockholm, father and son opened a small workshop for their researches, and for producing nitroglycerine. For Alfred had discovered a useful method of exploding this substance, for which he had obtained a government patent. At their workshop one day, and accident occurred: a nitroglycerine explosion wrecked the plant, and Alfred's youngest brother and several other men were killed in the blast. A month later Immanuel Nobel suffered a stroke and remained an invalid for the rest of his life.

This left Alfred Nobel to carry on alone. He now began to set up new factories in Norway and Germany. But nitroglycerine remained very dangerous, especially when handled without care. The mishap that killed one of the Nobel brothers was not the only one of its kind: Nobel's factory in Germany blew up; so did a ship off Panama; and other blasts occurred in San Francisco, New York, and Australia. In the end, Belgium and France no longer allowed nitroglycerine to be made on their territories, while Sweden would not let it be transported, and Britain severely restricted its use.

At last, in 1866 and 1867, Nobel solved the problem. Nitroglycerine is a highly unstable liquid. By adding absorbent materials he was able to store it and transport it safely. To explode it now required a special detonator. This new form of nitroglycerine explosive was called 'dynamite' (from the Greek dynamis, meaning force), and became popularly known as 'Nobel's safety powder'.

From then on, Alfred Nobel's factories grew rapidly. In 1871 he built a plant in Ardeer, Scotland, which later became one of the world's largest dynamite factories. By 1875 he had factories in almost every country in Europe, and two in the United States. In 1887 he invented ballistite, the smokeless nitroglycerine powder that most countries began to use as gunpowder. Altogether, Nobel took out more than 100 patents on his inventions.

Fluent in several language besides his native Swedish, and immensely rich, Nobel became something of an international citizen, traveling abroad and looking after concerns in many lands. He remained single and was a lonely, rather pessimistic man. Fully aware of the deadly weapon which his inventions had put into the hands of military powers, he supported various organizations which were working for peace in Europe.

When Alfred's brother Ludvig died in 1888, a Paris newspaper erroneously published the obituary it had prepared for Alfred under the heading "the Merchant of Death is Dead". The armaments manufacturer, stung by the denunciation, became determined to leave a legacy of good. In his final will, Nobel allocated £3¼ million from his vast empire to be place in a fund. The interest from this was to provide five international prizes each year. Recipients would be those whose work had been distinguished in the categories of physics, chemistry, physiology and/or medicine, literature and "the person who shall have done the most or the best work for fraternity between nations, for the abolition or reduction of standing armies and for holding and promotion of peace congresses" – the Nobel Peace Prize. It would be five years after his death before the first awards were given, due to the organizational and bureaucratic difficulties involved. The Nobel Prizes are now awarded annually in Stockholm, on the anniversary on his death.

The Nobel prizes have become one of the greatest honors that a scientist or writer may attain. They are awarded on recommendation from various learned bodies in Sweden, except for the peace prize, which depends on advice given by a committee of five people selected by the parliament of Norway. The prize itself consists of a gold medal and a certificate, together with a sum of (in 2012) $1.1 million. Sometimes the award is shared by several people, and if no one of sufficient merit is found, it is not made at all.

In the list of the award winners over the years are many of the great names of modern science and literature. The first Peace Prize, in 1901, went to Jean Henri Dunant, a citizen of Geneva, and founder of the Red Cross. Long gaps appear in the last list, because of the two world wars and for other reasons that made it hard to find a worthy champion of peace. The money accumulated in this way has been used to set up Nobel Institutes.

There have been a few errors along the way. In 1926 the Nobel Prize in Medicine went to Danish scientist Johannesburg Fibiger (1867–1928) for his "discovery" that roundworms led to cancer (they do not). But in a world where more than 300 various "peace prizes" are awarded every year, it is still the Nobel Peace Prize that continues to hold aloft the brightest hope for good in an changing and often fractured world.