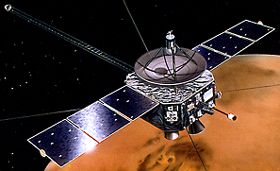 Nozomi was Japan's first attempted Mars orbiter. After a long and eventful journey to the Red Planet, the mission was finally abandoned in early Dec 2003.

Known before launch as Planet-B, Nozomi ("Hope") was launched on Jul 4, 1998, on the second flight of the M-V rocket from Kagoshima Space Center. Nozomi's primary scientific objective was to study the Martian upper atmosphere with emphasis on its interaction with the solar wind. The spacecraft had a mass of 541 kilograms, including the fuel for attitude and orbit control.

After launch, Nozomi was placed in an elliptical parking orbit around the Earth with a perigee of 340 km and an apogee of 400,000 km. The spacecraft used a lunar swingby on Sep 24, 1998, and another on Dec 18 to increase the apogee of its orbit. It swung by Earth on Dec 20, 1998, at a perigee of about 1,000 km. The gravitational assist from the swingby coupled with a 7-min burn of the bipropellant engine put Nozomi into an escape trajectory towards Mars. It was originally scheduled to arrive at Mars on Oct 11, 1999, but the Earth swingby left the spacecraft with insufficient acceleration and two course correction burns on Dec 21 used more propellant than planned, leaving the spacecraft short of fuel.

A revised mission plan was decided in which Nozomi would remain in heliocentric orbit for an additional four years, including two Earth flybys in Dec 2002 and Jun 2003, and encounter Mars at a slower relative velocity in Jan 2004. On Apr 21, 2002, as Nozomi was approaching Earth for the gravity assist maneuver, powerful solar flares damaged the spacecraft's onboard communications and power systems. An electrical short was caused in a power cell used to control the attitude control heating system which allowed the hydrazine fuel to freeze. The fuel thawed out as the craft approached Earth and maneuvers to put the craft on the correct trajectory for its Earth flyby were successful. Another Earth flyby occurred on Jun 19, 2003. The fuel had completely thawed out for this maneuver. However, a persistent electrical fault caused by the flares could not be fixed in time and it was decided to direct the probe away from Mars rather than risk it crashing into and contaminating the Martian surface.

If all had gone well, Nozomi would have been inserted into a highly eccentric Mars orbit with a periapsis 300 km above the surface, an apoapsis of 15 Mars radii, and an inclination of 170° with respect to the ecliptic plane. Shortly after insertion the mast and antennas would have been deployed. The periapsis would then have been lowered to 150 km. The periapsis portion of the orbit would have allowed in-situ measurements of the thermosphere and lower exosphere and remote sensing of the lower atmosphere and surface. The more distant parts of the orbit would have allowed study of the ions and neutral gas escaping from Mars and their interactions with the solar wind. The nominal mission was planned for one Martian year (approximately two Earth years).