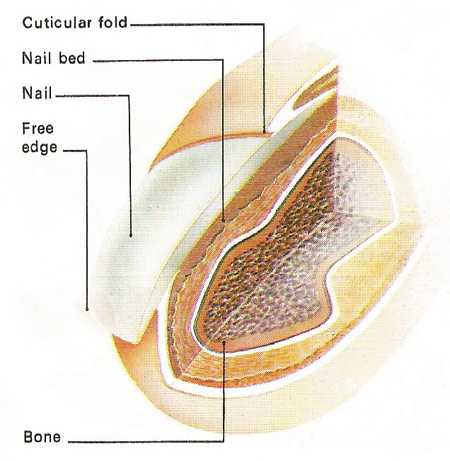 A useful protective covering for the ends of fingers and toes, nail is made of hard keratin. It rests on the nail bed, which is formed from the two deepest layers of the epidermis. The cuticle is above the root of the nail and the sensitive quick is located beneath the free edge. The pale half-moon called the lunula lies under the root and represents the active, growing region of the nail.

A nail is an appendage formed from the outer layer skin, the epidermis, which corresponds to the claw and hoof of other animals.

The part of each nail which is normally visible is called the body of the nail. This lies on the nail bed which is formed by the corium, the pink color of which is easily seen through the nail substance, At the tip of the finger where the nail is not attached to the corium it appears white in color, while at the bottom of the nail there is a lighter colored, moon-shaped area which is known as the lunula.

At its sides each nail is enclosed in little folds of skin called the nail walls. These folds are continuous with the skin that covers the root of the nail. The new nail substance is produced at the root of the germinative layer of the epidermis. As new nail substance is formed old nail is slowly pushed forward over the nail bed until in about three months' time it reaches the free border.

The nails occupy a rather exposed position and it is not unusual for them to be accidentally damaged. If the injury affects only the body of the nail, new nail formed at the root will, in time, push away the damaged portion and there will be no permanent harm. When a nail root is damaged, however, the nail that grows afterwards is often seriously deformed.