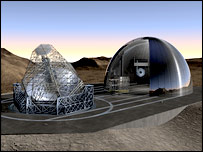 The OverWhelmingly Large Telescope (OWL) was a design for a huge optical telescope, with a mirror about 100 m in diameter supported by a structure about 200 m tall and weighing 40,000 tons. It would have 10 times more light-gathering power than all the other telescopes that have ever been built put together, could be completed by 2015 for a cost of less than $1 billion, and has been proposed by a team from the European Southern Observatory. Among its uses would be obtaining spectra of the atmospheres of exoplanets to allow astronomers to look for signatures of life, such as the presence of oxygen.