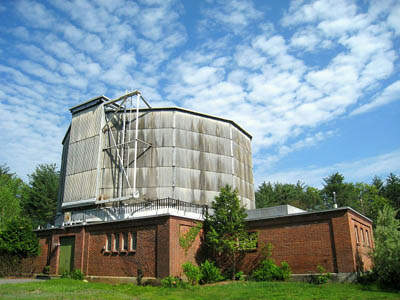 Building housing the Wyeth 61-in reflector at the Oak Ridge Observatory.

Oak Ridge Observatory is a facility in Harvard, Massachusetts, also known as the George R. Agassiz Station. Until 2005, it was operated by the Smithsonian Astrophysical Observatory, part of the Harvard-Smithsonian Center for Astrophysics. Among its principal instruments are the 61-in Wyeth reflecting telescope and a 26-m (84-foot) steerable radio telescope, which was used for the SETI project known as Project BETA.

The observatory was established in 1933. For several decades, its main work involving tracking asteroids and other minor objects in the Solar System. Starting in the 1980s, the main reflector was used to measure the precise position and movements of stars over long periods, which led to hunts for extrasolar planets.