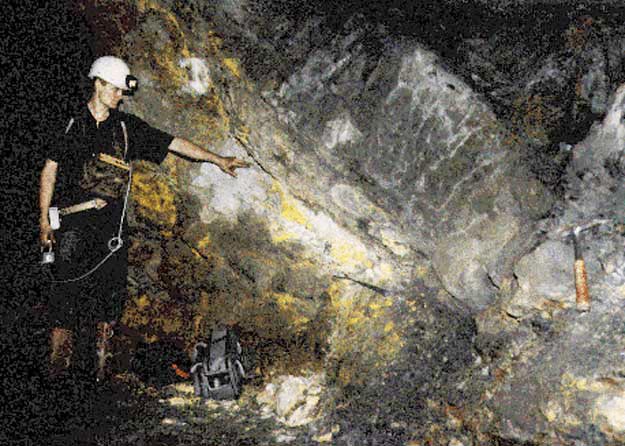 One of the fossil reactors at Oklo. Uranium oxide remains are visible as the yellowish rock.

The Oklo phenomenon is a a prehistoric natural 'nuclear reactor,' which was in operation about 2 billion years ago. It was discovered in the uranium deposit of Oklo in Gabon in 1972. Subsequently, further locations in this deposit were found where a self-perpetuating chain reaction must have taken place due to the reduced U-235 content in the natural uranium. Of the 17 known fossil reactors, 9 have been completely mined out. For the Oklo II location, it can be calculated from the depletion of uranium-235 entailed by fission that a minimum of 4 tonnes of U-235 must have been fissioned, 1 tonne of Pu-239 formed, and a volume of heat of about 100 billion kWh generated. As a comparison: in the reactor of a nuclear power plant of the 1,300-megawatt category, about 30 billion kilowatt-hours heat is generated by fission annually.

Oklo by-products are being used today to probe the stability of the fundamental constants over cosmological time-scales and to develop more effective means for disposing of human-manufactured nuclear waste.