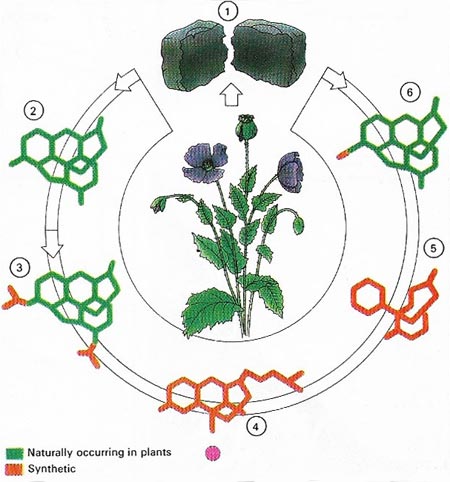 Most derivatives of opium (1) such as morphine (2), heroin (3), and meperdine hydrochloride (5), although extremely effective painkilling (analgesic) drugs, are at the same time highly addictive. It is possible in the laboratory to pinpoint which parts of the molecule are responsible for the analgesic and which for the addictive effect. On this basis drugs such as codeine (6) ad pentazocine (4) can be designed and synthesized. Extensive clinical trials are necessary to confirm their safety.

Opium is a narcotic extracted from the immature fruits of the opium poppy, Papaver somniferum, which is native to Greece and Asia Minor. The milky juice is refined to a powder which has a sharp, bitter taste. Drugs, some drugs of abuse, obtained from opium include the narcotic analgesics, heroin, morphine, and codeine. (Synthetic analogues of these include methadone and pethidine.) Older opium preparations, now rarely used, include laudanum and paregoric. The extraction of opium outside the pharmaceutical industry is strictly controlled in the West.