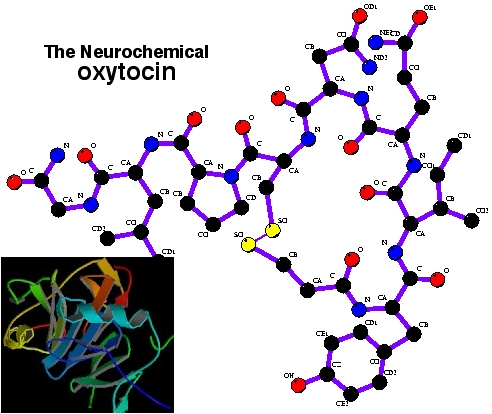 Oxytocin is a mammalian and avian hormone that in women is released mainly after stimulation of the nipples or distention of the vagina. Oxytocin facilitates birth through contraction of the smooth muscle of the uterus and breast-feeding through expulsion of milk from the mammary glands during suckling. It is also released during orgasm in both sexes. In the brain, it acts as a neurotransmitter and is involved in bonding and the formation of trust between people.

Oxytocin is produced by the neurosecretory cells of the hypothalamus but is stored and secreted by the posterior pituitary gland.


Use as a drug

Synthetic oxytocin can be used to induce birth. It is also used to help expel the placenta after delivery or to empty the uterus after an incomplete miscarriage. Oxytocin is sometimes given as a nasal spray to stimulate milk flow.