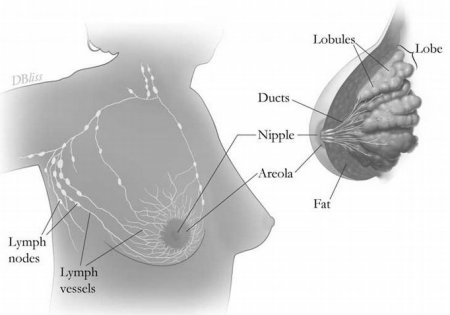 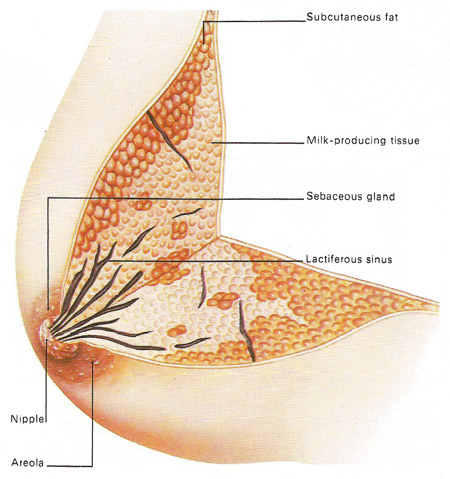 The breast contains a collection of special secretory glands. These lie deep within the skin where they are protected by fatty tissues. Each gland is made of lobes and becomes active in the secretion of milk in the period following childbirth. Milk is collected by a network of lactiferous sinuses and taken to the nipple, which is kept lubricated by sebaceous glands. These glands show through as tiny swellings in the areola, which is the dark area surrounding the nipple. The areola darkens still further during pregnancy and remains more deeply pigmented in women who have given birth to children.

Functionally, the mammary glands produce milk; structurally, they are modified sweat glands. Mammary glands, which are located in the breast overlying the pectoralis major muscles, are present in both sexes, but usually are functional only in the female.

Externally, each breast has a raised nipple, which is surrounded by a circular pigmented area called the areola. The nipples are sensitive to touch, due to the fact that they contain smooth muscle that contracts and causes them to become erect in response to stimulation.

Internally, the adult female breast contains 15 to 20 lobes of glandular tissue that radiate around the nipple. The lobes are separated by connective tissue and adipose tissue. The connective tissue helps support the breast. Some bands of connective tissue, called suspensory (Cooper's) ligaments, extend through the breast from the skin to the underlying muscles. The amount and distribution of the adipose tissue determines the size and shape of the breast. Each lobe consists of lobules that contain the glandular units. A lactiferous duct collects the milk from the lobules within each lobe and carries it to the nipple. Just before the nipple the lactiferous duct enlarges to form a lactiferous sinus (ampulla), which serves as a reservoir for milk. After the sinus, the duct again narrows and each duct opens independently on the surface of the nipple.

Mammary gland function is regulated by hormones. At puberty, increasing levels of estrogen stimulate the development of glandular tissue in the female breast. Estrogen also causes the breast to increase in size through the accumulation of adipose tissue. Progesterone stimulates the development of the duct system. During pregnancy these hormones enhance further development of the mammary glands. Prolactin from the anterior pituitary stimulates the production of milk within the glandular tissue, and oxytocin causes the ejection of milk from the glands.