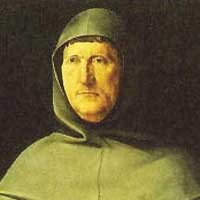 Luca Pacioli was an Italian mathematician and Franciscan monk who wrote several influential books. His encyclopedic Summa de arithmetica, geometria, proportioni et proportionalita (1494) summarized what was known about contemporary arithmetic, algebra, geometry, and trigonometry and gave a basis for the major progress in mathematics which took place in Europe shortly after. Divina proportione (1509), with drawings by none other than Leonardo da Vinci (surely no mathematical text was more impressively illustrated!), deals with the golden ratio, a subject that Paciola treats from an architectural standpoint in a second volume.

At his death, Paciola left unpublished a major book, De viribus amanuensis, on recreational problems, geometrical problems, and proverbs. This makes frequent reference to Leonardo, who assisted him with the project: many of the problems in this treatise are also in Leonardo's notebooks. Again it is a work for which Pacioli claimed no originality, describing it as a compendium.