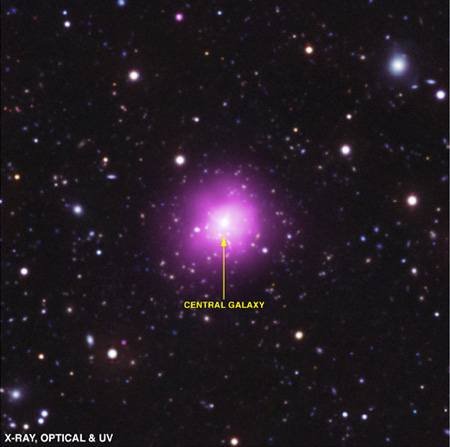 Composite image of the Phoenix Cluster, including an X-ray image from the Chandra X-ray Observatory in purple, an optical image from the 4-meter Blanco telescope in red, green and blue, and an ultraviolet image from the Galaxy Evolution Explorer (GALEX) in blue.


Central galaxy of the Phoenix

In the case of most galaxy clusters that astronomers have studied, the galaxy right at the heart of the cluster tends to be not only the biggest, most gravitationally-influential galaxy of the cluster but also the most evolved. Core galaxies usually glow red in the light of old stars, their youthful star-forming phase far behind them. But the Phoenix core galaxy shines blue in the light of numerous hot young stars, formed recently in a frenetic starburst period which is still going on (or, at least, it was at the time light now reaching us left the cluster). The central galaxy of the Phoenix is making about 740 new stars a year, easily beating the previous record for a core galaxy of 150 (itself far above the norm).

A likely explanation for the amazing level activity in the central galaxy is that astronomers have stumbled across a cluster in a key, previously-unseen, and fairly short-lived, stage of its development.

One of the outstanding puzzles in astrophysicists is what's called the cooling flow problem. In theory, the gas thrown into space when earlier generations of stars exploded should cool over time to form a flow of gas cold enough to condense and give rise to a fresh burst of star-making. The trouble was, no one had seen this happening – until now.

In most cases, it seems, the high-energy jets emanating from supermassive black holes at the centers of galaxies heat the surrounding gas, so that it never cools enough to enable a big wave of star birth to take place. This heating mechanism, for some reason yet to be determined, is temporarily shut down in the Phoenix Cluster. The jets of the supermassive black hole in the Phoenix core galaxy are weak, allowing the surrounding gas to fall in temperature sufficiently for a spectacular starburst to take place.

But this is likely to be, in cosmic terms, a passing phase in the career of the Phoenix. Measurements at X-ray and other wavelengths reveal that the central black hole in the core galaxy is growing very fast, adding 60 Suns-worth of a new material a year to its already colossal 20 billion solar masses. At some point, probably within the next hundred million years or so, its jets will erupt into life in a series of powerful outbursts, which will bring to an end the current remarkable starburst phase. One hundred million years is less than one percent of the age of the universe, so it isn't surprising that it's taken astronomers this long to track down a cluster in the throes of this showy activity.