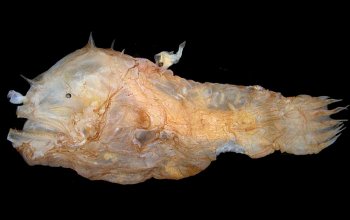 This 46 mm (1.8 in) female Photocorynus spiniceps (angler fish) has what looks like a small nub in the middle of her back. It is actually a 6.2 mm (less than a quarter of an inch) long male – the world's shortest known, sexually mature vertebrate. (Image: T. W. Pietsch/University of Washington).

Photocorynus spiniceps is a species of angler fish, the male of which, at 6.2 mm is the shortest known, sexually mature vertebrate. In terms of weight and volume, two other fish species, Paedocypris progenetica and Schindleria brevipinguis (the stout infantfish) are probably smaller.

The male Photocorynus spiniceps discovered in the Philippines was first reported in the journal Ichthyological Research in 2005. It spends its life fused to its much larger female counterpart, which is many thousands of times greater in weight. While the female takes care of swimming and eating, the male fish, with its enormous (relative to its body size) testes, has almost the sole task of aiding reproduction. In scientific terms, the male P. spiniceps is described as a sexual parasite.