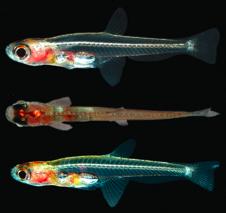 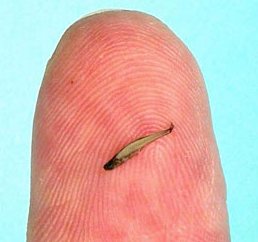 Paedocypris is a recently discovered genus of fish that includes one of the world's smallest known fish and smallest known vertebrates, Paedocypris progenetica. Two species of Paedocypris were found living in highly acidic peat wetlands on the Indonesian island of Sumatra and in the Malaysian part of Borneo.

Paedocypris progenetica, a distant cousin of the carp, is thin, transparent, and the size of a large mosquito when fully grown. A mature female specimen had a length of only 7.9 mm (0.31 in). This puts it among the top three of smallest known fish (and vertebrate) species, its two rivals being Schindleria brevipinguis (also called the stout infantfish) and the male Photocorynus spiniceps (a species of angler fish). Slightly larger is Trimmatom nanus (the dwarf goby), a marine fish of the Western Pacific that grows marginally longer. In terms of length, the male angler fish, at a mere 6.2 mm, can claim to be the shortest of all fish. However, if comparisons are made instead on the basis of weight or volume, then the competition is between Paedocypris and the stout infantfish.

Paedocypris progenetica has only a very rudimentary skull which leaves the brain exposed. Males also have a tough pad on the front of the pelvic girdle that may be used to help them clutch onto females during mating.

The so-called "blackwater" swamps where Paedocypris was found are a unique landscape of flooded trees growing in water-logged, soft peaty soil that is often several meters thick. The water is stained reddish-black, like very strong tea, and is highly with a pH value of about 3.

The new fish were discovered by Maurice Kottelat and Tan Heok Hui, who are researchers at the Raffles Museum of Biodiversity Research at the National University of Singapore, assisted by Ralf Britz of Britain's National Museum of Natural History and Kai-Erik Witte at the Max Planck Institute for Developmental Biology in Tuebingen, Germany.