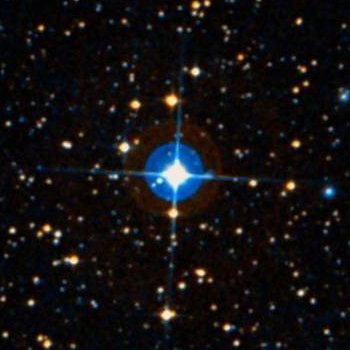 Przybylski's Star (HD 101065) is one of the most chemically peculiar stars known. It lies 370 light-years away in the constellation Centaurus, and is named informally after the Polish-Australian astronomer, Antoni Przybylski (pronounced "jebilski"), whodiscovered its peculiarity in 1961.

Apart from the usual lines of hydrogen and the calcium H and K, the strongest lines in HD 101065 are due to singly ionized lanthanides, presenting a spectrum similar to that of an S star, a highly evolved object whose atmosphere is enriched with recently synthesized material from deep within its interior. However, it is now recognised that HD 101065 is a cool, extreme Ap star, a conclusion supported by the discovery of a several kilogauss magnetic field in HD 101065 similar to that of many other Ap stars. The outstanding difficulty with HD 101065 as an Ap star was that its spectrum didn't look like the others. Lines of neutral and first ionized iron are prominent in the spectra of most Ap stars, and in some cases, the iron is clearly overabundant, whereas in the spectrum of HD 101065 the lines of iron and nickel are weak.

In 2018, it was reported that Przybylski's Star has an extremely slow rotation with a likely period of about 188 years (although there is some uncertainty in this).1 The discovery of a very long rotation period of Przybylski's star along with the previous detection of slow rotation in six other magnetic Ap stars suggests the possible existence of other not yet identified slowly rotating Ap stars.