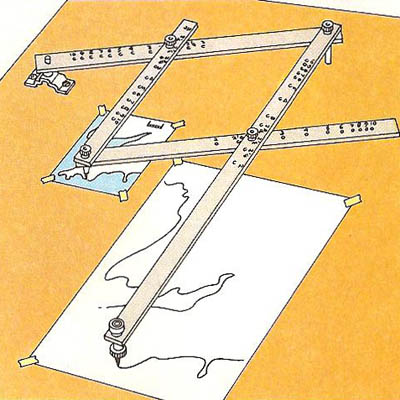 A draftsman's pantograph, here being used to reproduce a map outline at 2½ times the size of the original.

A pantograph, or pantagraph (Greek panta , "all"; graphein, "to delineate") is an instrument for enlarging, reducing, or copying a geometric figure or motion. It consists of four hinged bars forming a parallelogram, one vertex being fixed. It is used in technical drawing and map-making. A spring-loaded pantograph linkage is used on electric locomotives to collect current from an overhead line.

The pantograph is made in various form, one of which is shown in the figure above. Four rods are so hinged to one another that AE is equal to DF, and AD to EF; hence ADFE is always a parallelogram. If from a given point C on AE any straight line BH (a, b) be drawn, cutting the other arms, the triangle ABC will always, no matter how the arms of the instrument be moved, be equal to the triangle DBH. It follows that, if the instrument is pivoted on a point B (usually by a weight), a pencil-point inserted at H and a tracing-point at C, and the latter traced over the lines of a drawing, the pencil-point at H will trace a reduced copy of the drawing. The proportion of the reduction will be as BH is to BC. B and H are made to slide on their respective rods, so that any proportion of reduction can be made. By changing the places of the pencil and tracing-point, an enlarged copy may be made. The instrument is fitted with litter castors to facilitate its free motion.

The pantograph was invented by the Jesuit Christoph Scheiner prior to 1631, and improved by W. Wallace of Edinburgh in 1831.