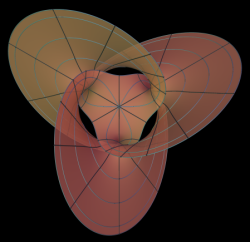 The idea of the projective plane arose from the study of perspective by mathematicians and painters in the Renaissance. In trying to represent parallel lines in space on the two dimensional surface of a painting, it was found useful to introduce the notion of a line at infinity on which parallel lines met. The study of the geometry that adds this extra line of ideal points to the ordinary familiar plane came to be known as projective geometry, because of its use in studying projections of figures onto different lines. This idea was even more important in three dimensions, since projections are used for representing three dimensional figures on planes.