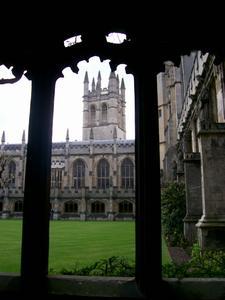 A quadrangle is a plane figure consisting of four points, each of which is joined to two other points by a line segment. A quadrangle may be concave or convex depending on whether the line segments do or don't intersect. A convex quadrangle is a quadrilateral. The word is from the Latin quadrangulum for four-cornered and is also used to describe a rectangular area surrounded on all four sides by buildings, or to such buildings themselves.