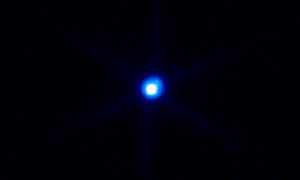 A quark star is a hypothetical star composed of free quarks with a density intermediate between that of a neutron star and a black hole. First theorized in the 1980s, it had been seriously doubted whether these objects really existed in nature. However, in April 2002, observations by the Chandra X-ray Observatory of an object known as RX J185635-375, about 450 light-years away, seemed to fit the bill. RX J1856 was previously thought to be a neutron star but Chandra's measurements suggest that, at just over 11 km across, it is too small to be composed of solid nucleons (neutrons and protons). Instead, at the density it appears to have, nucleons would burst apart releasing their constituent quarks. A second candidate quark star is 3C58, previously believed to be an ordinary neutron star resulting from a supernova that occurred in the year 1181. However, with a surface temperature of only about 1 million &#176C, it is much cooler than it should be if made purely of nucleons; theory suggests that some of 3C58's material has degenerated into a quark broth.