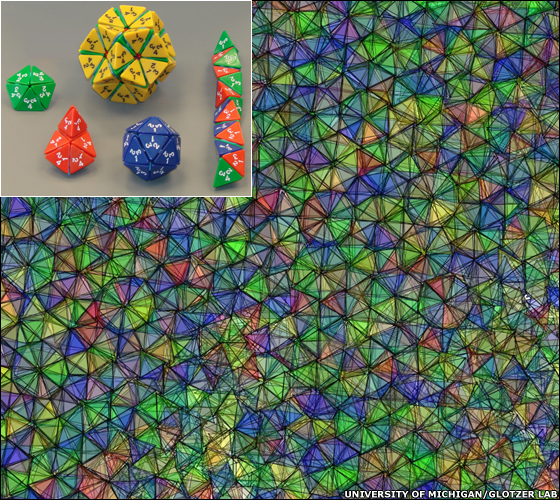 This pattern is the first evidence of non-spherical particles coalescing into a "quasicrystal". Researchers reporting in Nature used computer simulations to show how four-sided pyramids organise themselves into different motifs (as shown by the dice) and then into the dense 3-D pattern.

A quasicrystal is a strange type of solid whose atomic structure is very regular but never quite repeats. Quasicrystalline structures don't have a simple unit cell that can be repeated periodically in all directions to fill space, although they do have local patterns that repeat almost periodically. They also have local rotational symmetries, such as those of a pentagon, that can't exist in ordinary crystals.

Prior to the discovery of quasicrystals, it was thought that five-fold crystal symmetry was impossible, because there are no space-filling periodic tilings of this kind. The best known examples of quasicrystals resemble Penrose tilings, which use repeated copies of two different rhombi to cover an infinite plane in intricate, interlocking patterns. In fact, some quasicrystals can be sliced in such a way that the atoms on the surface follow the exact pattern of the Penrose tiling.