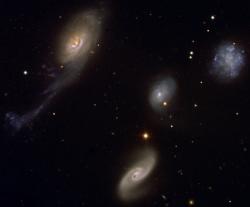 Robert's Quartet is a tight grouping of four galaxies which lies about 160 million light years from Earth in the southern constellation Phoenix. The galaxies of Robert's Quartet are crowded into a space just 150,000 light years across – only 1.5 times the width of our own galaxy, the Milky Way. This proximity makes them one of the best known examples of a compact group of galaxies, whose members gravitationally disturb each other. In the group's largest galaxy, NGC 92 (to the left in the photo), that interaction has sparked the creation of about 200 star-forming regions and unravelled a stream of gas and dust stretching 100,000 light years. Nearly 60 stellar nurseries have sprung up in the irregular galaxy NGC 87, in the upper right of the image, while a ring of enhanced star birth circles the spiral galaxy NGC 89 (lower middle).