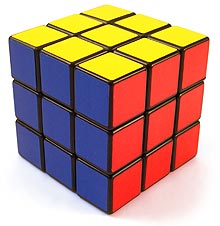 Rubik's Cube is a 3 × 3 × 3 cube in which the 26 subcubes on the outside are internally hinged in such a way that rotation (by a quarter turn in either direction or a half turn) is possible in any plane of cubes. Each of the six sides is painted a distinct color, and the goal of the puzzle is to return the cube to a state in which each side has a single color after it has been randomized by repeated rotations.

Invented in 1974 by the Hungarian Ernö Rubik, patented in 1975, and put on the market in Hungary in 1977, it went on to sell some 100 million copies worldwide over the next decade. Since there are somewhat over 43 million trillion different arrangements of the small cubes, only one of which corresponds to the desired goal, to solve Rubik's Cube in a time significantly less than the current age of the universe (let alone the world record, which stands at around 20 sec) calls for some kind of methodical approach.

Algorithms exist for solving a cube from an arbitrary initial position, but they are not necessarily optimal (i.e., requiring a minimum number of turns).