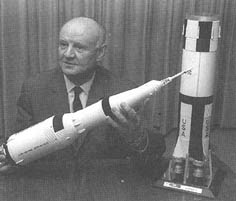 Arthur Rudolph with a model of the Saturn V.

Arthur Rudolph was a German-born rocket scientist who helped develop the American program that took men to the Moon in 1969. One of 118 top German rocket experts secretly brought to the United States after World War II in Operation Paperclip, Rudolph became project manager of the Saturn V rocket, which powered the Apollo missions.

In 1984, nearly a decade after he retired, the Department of Justice accused Rudolph of participating in a slave-labor program, which ultimately involved the deaths of 20,000 people, when he was operations director of the V-2 rocket factory at Nordhausen during the Second World War. Although Rudolph contested the charges, he relinquished his American citizenship and returned to Germany. While the Justice Department did not pursue his case, he was refused a United States visa in 1989 to attend a 20th-anniversary celebration of the first Moon landing.