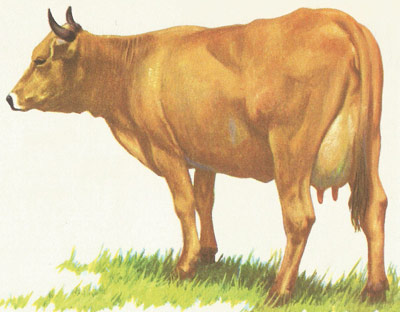 The cow is the most familiar of the ruminants, and also the most useful of them. 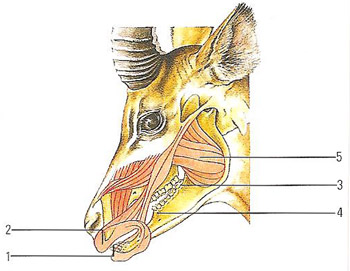 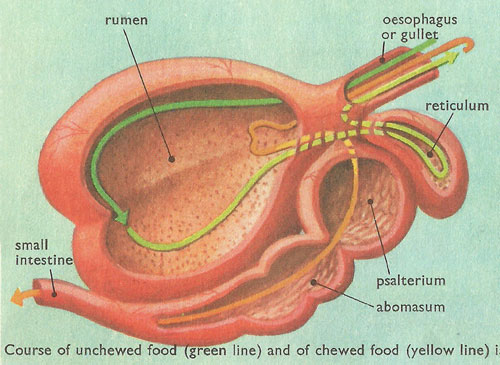 Ruminant stomach. The food is swallowed unchewed and is stored in the rumen until this is full and the beast begins to ruminate. The food then passes to the reticulum, where it is squeezed into balls which are brought up into the mouth and chewed. When the food is swallowed again it goes through the psalterium, which acts as a filter, allowing only well-chewed, fairly liquid food to pass into the abomasums, where digestion begins. Course of unchewed food (green line) and of chewed food (yellow line) 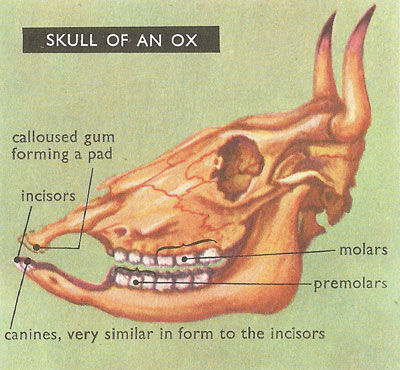 Most ruminants have no front teeth (incisors and canines0 in the upper jaw, but have a hard pad against which the front teeth of the lower jaw bite, gripping and tearing off the leaves and grass. The back teeth (premolars and molars) have flat surfaces with hard ridges, for grinding up the food when the animal is chewing the cud. 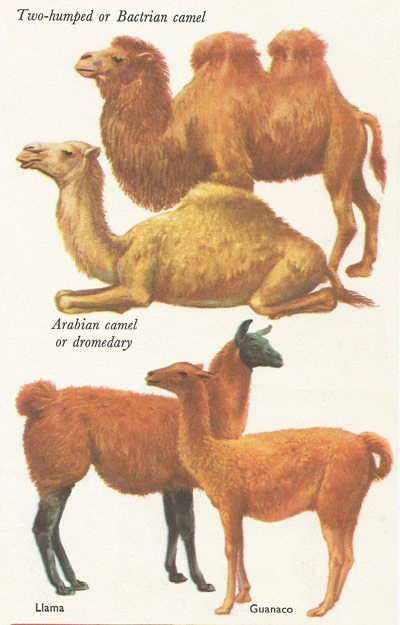 Other examples of ruminants.

Constituents of the milk of ruminants.

A ruminant is a cud-chewing, even-toed, hoofed mammal. Examples include cattle, sheep, goat, antelope, giraffe, deer, okapi, and chevrotain. All except the chevrotain have four-chambered stomachs. Hoofed mammals are known as ungulates. All even-toed ungulates, or Artiodactyla, are ruminants except for the pig and hippopotamus. Odd-toed hoofed mammals, or Perissodactyla, such as the horse, are not ruminants.

Ruminants regurgitate and re-chew their food once having swallowed it. They feed by filling one compartment of a three- or four-chambered stomach with unmasticated food, and bringing it back up to the mouth again to be fully chewed and finally swallowed. This method of feeding is an adaptation in many herbivores to increase the time available for digestion of relatively indigestible vegetable matter.

Almost all the milk that we consume is cow's milk. Milk and meat are the chief products derived from the cow, but in addition to them are leather, fertiliser, (both in the form of manure and bone meal), and finally work. One does not often see oxen working nowadays, but not long ago they were important draught animals (animals used for pulling carts, ploughs, and so on). After cattle, the sheep is the most important domestic animal, its main products being meat and wool.

Grass and leaves, the food of herbivorous (plant-eating) animals, need to be chewed very thoroughly of they are to be digested properly; they are also foods which are not very nourishing, so must be eaten in great quantity. If all this chewing were done while the animals were feeding, they would have to spend a great deal of time moving about, intent on seeking their food, and would be very much exposed to attack by beasts of prey. So what the ruminant does is to feed hastily, stuffing itself with unchewed grass. Then it finds a safe place where it can bring up the grass again, chew it thoroughly, and swallow it a second time. This process is called ruminating, or chewing the cud. The teeth and stomachs of ruminants are adapted for this way of feeding. The front teeth are designed for seizing and tearing off the grass, and the back teeth for grinding it up. The stomach is divided into a series of compartments. Our own domestic cattle are probably derived from the Aurochs (Bos primigenius), a kind of giant ox, now extinct, and the Celtic Ox (Bos longifrons) which man had tamed by the late Stone Age. The humped cattle, or Zebu, of India have a distinct origin. The origin of the domestic sheep is difficult to trace; probably several Asiatic species are involved in it, as well as the European moufflon (wild sheep). The goat was domesticated very early in the history of man; it is possible that several wild species were tamed and used as domestic animals in early times, as sheep were.

Together with the pigs and hippopotamuses, the ruminants make up the order of mammals called the Artiodactyla. They can be divided into six families as follows:

Chevrotains, or mouse deer. These little ruminants have long canine teeth in the upper jaw, a stomach with three compartments, and no horns. The legs are slender, with tiny hooves. They are found in Africa and Asia. The kanchil of Malaya (Tragulus kanchil), a kind of chevrotain, is the smallest of all the hoofed animals; it is no larger than a hare and stands only 8 inches his at the shoulder.

Musk deer. Found in the mountain forests of Asia, these animals have long upper canine teeth and no horns. On the belly of the male there is a gland containing a strong-smelling secretion.

Camels and llamas. These animals are quite distinct from the other Tylopoda. They have no horns, a stomach with three (not four) compartments, and peculiar feet. These feet end in two toes, but the animal's weight rests on two joints of the toes instead of only on the end joint, so that there is no true hoof. There are two species of camel, Bactrian, and the Arabian camel or dromedary; only the former now exists in the wild state. The llama and alpaca are domesticated forms of the wild guanaco; they live in the mountainous regions of South America.

True deer. They are distinguished by the possession of antlers. These differ from the horns of other ruminants as they are made of bone, and are shed and regrown at intervals. Also, in all the species but one – reindeer – only the males have antlers. Deer are found all over the world except in Australia and Africa south of the Sahara. Red deer and roe deer are native to Britain, and some oter species have been introduced. The largest deer is the elk or moose, which is found in northern Europe and North America. The reindeer, known a caribou in America, has been domesticated by the Lapps and is used for transport, milking, and meat.

Giraffe and okapi. Giraffes are confined to Africa, and are by far the tallest animals in the world; the head of a large one may be 19 feet from the ground. There is only one species, divided into two subspecies or races. The okapi, also African, is a rare animal only discovered in 1901.

Hollow-horned ruminants. This is the most important group of ruminants, including the most useful domestic animals as well as a great variety of wild species. They are native to all the continents except Australia and South America, and are most numerous and varied in Africa. The horns grow continuously during the animal's life, and are not shed as deers' antlers are.

The feet of ruminants end in an even number of toes (two or four). In this they are like pigs, and are classed with them in the order Artiodactyla, a word meaning 'even-toed'. In the odd-toed hoofed animals or Perissodactyla (horse, rhinoceros) the foot ends in one or three toes.