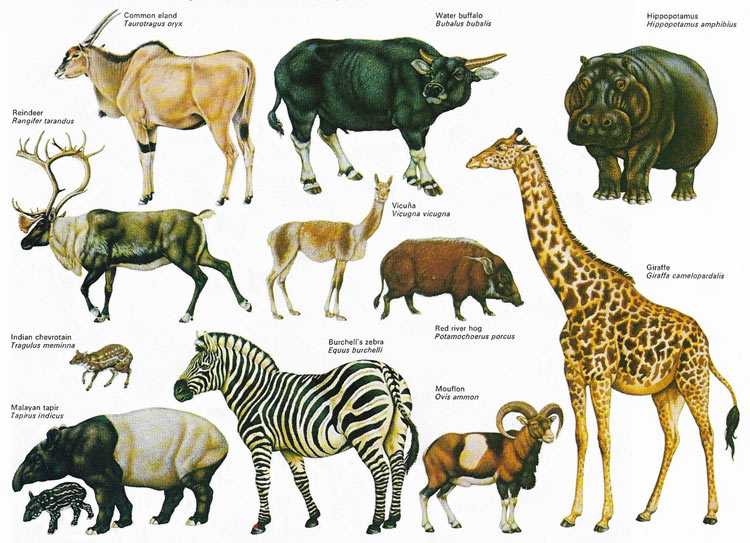 Fig 1. Hoofed animals include many species economically important to man. The eland is the largest of the antelopes. Recent attempts have been made to domesticate it for its excellent milk, meat, and hides. The water buffalo is found as a wild animal in some parts of India but has been domesticated in much of the tropical world. The hippopotamus, an African animal, is found in rivers, lakes, and swamps. The reindeer migrates vast distances between summer and winter feeding grounds. Both male and female carry antlers. The vicuna is a South American relative of the camel and lives in small herds in arid or mountainous areas. Its numbers have been greatly reduced by hunters seeking their fine silky fleeces. The red river hog, so-called because of its reddish bristles, is found in Africa. It lives in family groups and forages at night. Chevrotains live in Africa and Asia. They are small, shy, nocturnal animals that inhabit dense bush. The males develop long tusks. Burchell's zebra is the commonest of the striped horses of Africa. Why it is striped is a puzzle, for it lives in family groups in open country where the stripes seem to make it more obvious. The Malayan tapir is a shy, nocturnal inhabitant of dense forests in southeast Asia. The mouflon is a mountain dweller found only in the remoter parts of Sardinia and Corsica. It is related to the ancestor of the domestic sheep, whose fleece has been developed from the wool layer beneath the mouflon's top coat of coarse fur. The long neck of the giraffe enables it to reach trees up to the height of 6 meters (18 feet). 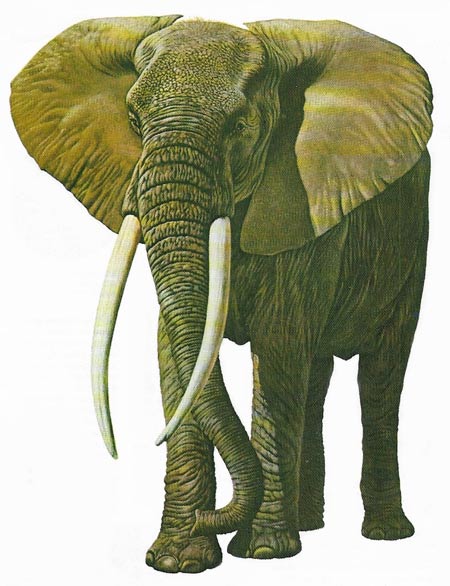 Fig 2. The African elephant is the largest land mammal; a big male may stand at nearly 4 m (12 ft) and weigh over 7 tons. The tusks are upper incisor teeth that continue to grow throughout the long life of the animal. 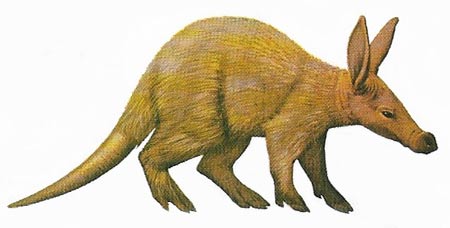 Fig 3. The aardvark, which measures up to 1.5 m (5 ft) long, is a subungulate found in much of Africa. It is rarely seen for it is nocturnal and extremely shy. Its presence may be detected by the large burrows it digs, using the hoof-like claws on its forefeet. It feeds chiefly on termites and ants, which it catches with its long tongue, coated with sticky saliva. It also eats vegetation. 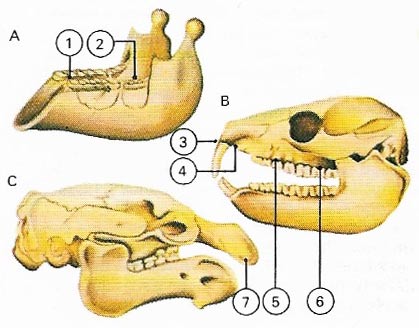 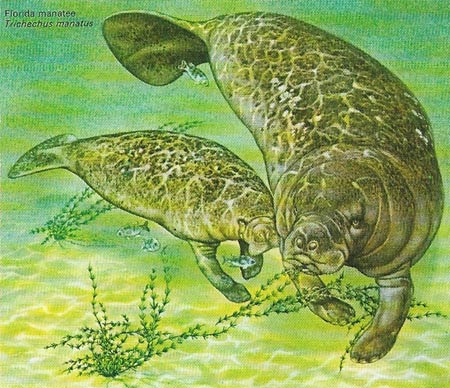 Fig 5. The manatees are subungulates of the tropical coasts of the Atlantic, although one species travels as far north as Georgia. The fleshy lobes on the upper lip are sufficiently mobile to seize food and pass it to the mouth. 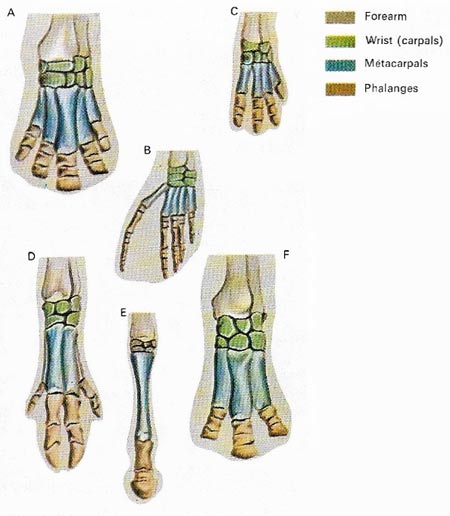 Fig 6. The front limbs of a selection of hoofed animals show that the same sequence of joints occurs however many toes there are. The elephant's foot (A) has 5 toes slightly spread and backed by tissue pad. The manatee's flipper (B) and the rock hyrax's trotter (C) both have a handlike skeleton. The pig (D) has 4 toes but walks on only 2. The horse's 'hand' (E) contains only one toe, with the last of the finger bones carrying the hoof, while the rhinoceros (F) has 3 toes to each foot.

An ungulate is any hoofed mammal. Most ungulates, including cattle, sheep, pigs, and deer, are members of the order Artiodactyla (with an even number of toes). The order Perissodactyla (ungulates with an odd number of toes) consist of horses, tapirs, and rhinoceroses. The orders Proboscidea and Hyracoidea, collectively known as sub-ungulates, contain elephants and hyraxes.

More than 200 different species of ungulates, all of which are herbivores, most feeding on tough vegetation which they chew with specialize and complex teeth. Hoofs are large, flat toenails which developed in the course of evolution as a result of a tendency to stand and walk on their toes rather than using the full length of the foot in the way that humans and their close relatives do. This has the advantage of increasing the length of the leg by the length of the foot, and sometimes by that of the toes as well, resulting in a longer stride and faster movement.

Most hoofed animals belong to two great orders: the even-toed, or Artiodactyla, which have two or four toes on each foot; and the odd-toed, or Perissodactyla, which have a variable, but almost an add number of toes. There are approximately 190 species of even-toed animals and roughly 15 species of odd-toed animals. There is, in addition, another group of hoofed mammals, the subungulates, which includes animals as diverse as the elephant, the rock hyrax, and the manatee which has forelimbs developed as flippers and no hind limbs. It is the relationship between the teeth that has confirmed the relationship between group members.

The ungulates arose from early mammalian stock at the start of the Cenozoic era some 60 million years ago and by the Eocene, some 20 million years later, they had become large, heavy-bodied herbivores many of which were destined to be replaced, in the Miocene, by fleet-footed grazers. Even in the early days of the ungulates three distinct groups began to emerge. Thus although the cow group (even-toed) and the horse group (odd-toed) may seem linked they have a long history of separate evolution.

Of the two, the even-toed species have proved to be the better survivors for almost all the medium to large plant-eaters in the world belong to this group. The more primitive even-toed species include pigs and the peccaries (found in South America), which have four well-developed toes on each limb. They are omnivorous in their choice of food and their dentition is less specialized than in many other forms. Hippopotamuses, which retreat to water during the daytime, come ashore to feed at night, and in some areas of Africa are major crop thieves. Camels, which are highly adapted for desert life, have only two toes on each foot, as do their South American relatives the closely similar llama, guanaco, and alpaca. All of these animals have some upper teeth.

The upper front teeth of the other even-toed, cud-chewing ungulates are missing and are replaced by a horny pad, but they can take in food tremendously fast, often using the tongue to tear at vegetation. The food is passed to a holding compartment in the stomach and regurgitated later to be masticated thoroughly before being swallowed a second time, after which digestion proper starts. One advantage of chewing the cud is that food which may have been gathered in dangerous areas and rapidly eaten can be digested later in a place of comparative safety. Deer, giraffes, antelopes, cattle, sheep, and goats all chew the cud.

Odd toed-animals were at one time more numerous than at present; today only horses, rhinoceroses, and tapirs survive. The rarity of the first two is largely due to persecution by man, and the true wild horses and asses and the three species of Asiatic rhinoceroses are among the rarest mammals in the world, although the zebra is relatively common in parts of Africa. No odd-toed animal chews the cud, and none has any true horns, those of the rhinoceros being made of compressed hair. The rhinos have three toes on each foot, the tapirs have four on the front feet and three on the hind feet, while horses (including donkeys and zebras) have lost all but the large central toes of each foot. The balance of the leg is therefore completely different from that of the even-toed animals.

The subungulates are the smallest group of hoofed animals. Two species of elephant survive to the present day in Africa and southern Asia, the sole remnants of an order of giant animals which once inhabited most of the world. Their size alone distinguishes them from all other land mammals, but the possession of a trunk and the peculiarities of the teeth, which include two tusks in the upper jaw and only four other teeth, also set them apart. Elephants eat much food and may travel many miles a day in search of it.

A group of animals found in Africa and the Near East and thought to be closely related to the elephants is that of the hyraxes, small, dumpy yet agile creatures which live socially in forested or rocky areas. All have hoof-like nails on the four toes of the front feet and a large claw on the innermost of the three toes of the hind feet.

Fossil remains have shown that the early relatives of the manatee were similar to those of the elephant. Now, however, the manatees are entirely aquatic, living in tropical rivers and offshore areas where they feed on vascular plants akin to eelgrass. They are large, placid, sluggish animals, which swim by means of a tail fluke. The forelimb is transformed into a paddle and in some species this carries small flattened fingernails.