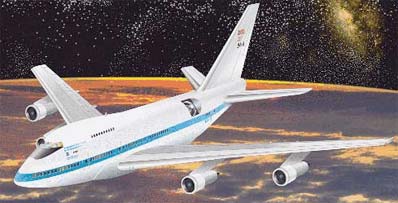 SOFIA (Stratospheric Observatory for Infrared Astronomy) is a Boeing 747-SP aircraft modified to carry a 2.5-m (98.4-in) optical/infrared/sub-millimeter telescope, developed by DLR, the German center for aerospace research, located in Bonn. SOFIA, a joint project of NASA and DLR, is the largest airborne telescope in the world, capable of observations that are impossible for even the largest and highest of ground-based instruments. It is intended as a successor to the Kuiper Airborne Observatory.

MAN Technologies AG, Mainz and Augsburg, Germany, built the telescope for SOFIA. Its optics and tracking system were supplied by Kayser-Threde Corp., Munich. Several other sub-contractors located in Europe also helped fabricate the complex telescope. The telescope assembly was delivered to L-3 Communications in September 2002. SOFIA is based at NASA Ames Research Center in California. Scientific management of the observatory operations will be conducted for NASA by USRA (Universities Space Research Association). Evergreen Airlines will be responsible for maintenance and flight operations.

February 2006: SOFIA was finally completed in 2005, five years behind schedule and $200 million over budget. It was almost immediately faced with being axed before it ever took flight because NASA has diverted funds away from its science programs to the Space Shuttle and ISS. SOFIA is currently under review and will receive no further funds for the forseeable future.