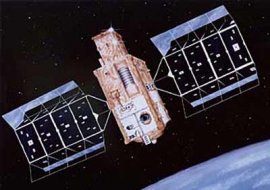 STEX (Space Technology Experiments) was a National Reconnaissance Office satellite that, for the most part, successfully tested over two dozen advanced technology subsystems. Among STEX's main equipment were Hall Effect electric thrusters derived from Russian technology, experimental solar arrays and batteries, and the Advanced Tether Experiment (ATeX), which was a follow-on to the earlier TiPS (Tether Physics and Survivability) satellite. ATeX comprised two end-masses connected by a 6-km polyethelyne tether. The upper end mass was deployed first, while the lower end mass was supposed to remain attached to STEX. However, this experiment reportedly failed on 16 January 1989, when, with only 21 m of tether deployed, the tether was so far off vertical that automatic safety systems jettisoned the base to protect the remainder of the STEX satellite.