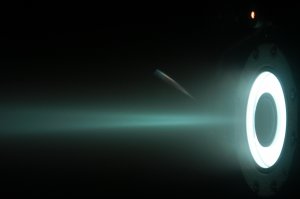 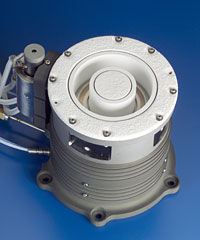 The workings of a Hall effect thruster.

Movement of the xenon ions and atoms and electrons in the thruster.

A Hall effect thruster is a small rocket engine that uses a powerful magnetic field to accelerate a low density plasma and so produce thrust. The Hall effect thruster, also called a plasma thruster, is a form of electrostatic propulsion, which in turn is a form ion propulsion (a category of electric space propulsion). Like gridded ion engines, such as XIPS, Hall thrusters are classified as electrostatic thrusters. Both utilize an inert gas, commonly xenon, as a propellant.


History of the device

Initial work on Hall effect thrusters was carried out independently in the United States and the Soviet Union in the 1950s and '60s. Because of inefficiency in the early designs, development of this type of thruster came to a halt in the US in about 1970. However, continuing research in the Soviet Union into the ion acceleration mechanism led to the Hall thruster becoming an efficient propulsion device.

Two types of Hall thrusters were developed: the stationary plasma thruster (SPT) at the Kurchatov Institute and the anode layer thruster (ALT) at the Central Research Institute for Machine Building (TsNIIMASH). SPT units have been flown more than 200 Soviet/Russian satellites for the purpose station-keeping, beginning with Meteor satellites in 1972. With the end of the Cold War, this technology became available in the West. Work in the United States to further quantify SPT performance and flight qualify SPTs for western spacecraft has been done primarily at NASA's Glenn Research Center (formerly Lewis Research Center) and the Jet Propulsion Laboratory. A Hall effect thruster was also used by the European SMART-1 probe.

Electrons are generated by a hollow cathode (negative electrode) at the downstream end of the thruster. The anode (positive electrode) or "channel" is charged to a high potential by the thruster's power supply. The electrons are attracted to the channel walls and accelerate in the upstream direction. As the electrons move toward the channel, they encounter a magnetic field produced by the thruster's powerful electromagnets. This high-strength magnetic field traps the electrons, causing them to form into a circling ring at the downstream end of the thruster channel. The Hall thruster gets its name from this flow of electrons, called the Hall current.

The propellant, which consists of a inert gas such as xenon or krypton at low pressure, is injected into the thruster's channel. Since Hall thrusters use inert gas for propellant, there is no risk of explosion as there is with chemical rockets. Some of the trapped electrons in the channel collide with the propellant atoms, creating ions. When the propellant ions are generated, they experience the electric field produced between the channel (positive) and the ring of electrons (negative) and accelerate out of the thruster, creating an ion beam. The thrust is generated from the force that the ions impart to the electron cloud. This force is transferred to the magnetic field, which, in turn, is transmitted to the magnetic circuit of the thruster. The electrons are highly mobile and attracted to the ions in the beam, causing an equal amount of electrons and ions to leave the thruster at the same time. This enables the thruster to remain overall electrically neutral.

· The acceleration region of the SPT is within the thruster itself while in the case of the ALT it is in front of the thruster.

As well as the Hall effect thruster itself, four other components are needed to make a complete electric propulsion system: a power source, a power processing unit (PPU), a propellant management system (PMS), and a control computer. The power source can be any source of electrical power, but solar and nuclear are the primary options. A solar electric propulsion system (SEP) uses sunlight and solar cells for power generation. A nuclear electric propulsion system (NEP) uses a nuclear heat source coupled to an electric generator. The PPU converts the electrical power generated by the power source into the power required by each component of the Hall thruster. It generates the high voltages required by the Hall thruster channel and the high currents required for the hollow cathode. The PMS controls the propellant flow from the propellant tank to the thruster and hollow cathode. Modern PMS units have evolved to a level of sophisticated design that no longer requires moving parts. The control computer controls and monitors system performance. The Hall thruster then processes the propellant and power to perform work.

Hall thrusters have a specific impulse typically in the range 1,200 to 1,800 sec – much higher than the 300 to 400 sec of chemical rockets. However, they provide a much lower thrust. A modern Hall thruster can deliver up to 3 newtons (0.7 lb) of thrust, which is equivalent to the force you would feel by holding 54 US quarters in your hand. The high specific impulse enables a spacecraft powered by a Hall thruster to reach a top speed of about 50,000 m/s (112,000 mph). The low thrust, on the other hand, means that weeks or months are needed to attain this speed.