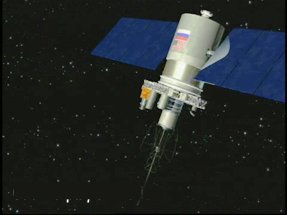 The Meteor series were Soviet weather satellites. The first Meteor system became operational in 1969 after several years of testing. Subsequently about 30 Meteors were launched between 1969 and 1978 before the first of an upgraded version, Meteor 2, was orbited in July 1975. A further series, Meteor 3, debuted in October 1985, although Meteor 2 satellites continued to be launched in parallel. All of these spacecraft were placed in high-inclination orbits because a geostationary location – the usual norm for weather satellites – provides a poor view of the high latitudes at which much Russian territory lies.

The Soviet Union did indicate that it would launch a geostationary weather satellite as early as 1978 but it was the mid-1990s before the promised spacecraft, GOMS (Geostationary Operational Meteorological Satellite), finally took off.