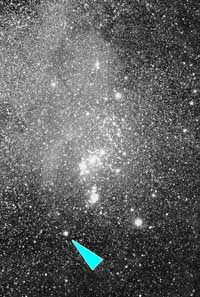 Saiph (Kappa Orionis) is a blue supergiant that is the sixth brightest star in the constellation Orion, lying to the lower left in the Hunter's main seven-star figure. Its name comes from a longer Arabic phrase for "sword of the giant," though it lies outside the region known today as Orion's Sword.

Though at about the same distance as Rigel, Saiph looks fainter because its much higher temperature causes it to radiate much of its light in the ultraviolet part of the spectrum. Confusingly, its luminosity and temperature place it close to the region of hydrogen-fusion stability, as if it were just in the process of developing into a supergiant. Although it has a slightly variable spectrum, it makes a good background source of light with which the interstellar medium can be studied.