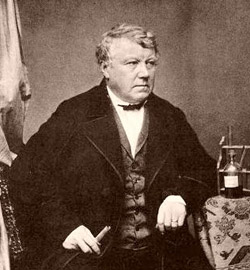 Christian Schönbein was a German chemist best known for his discovery of ozone and guncotton.

At the age of 13, Schönbein was apprenticed to a chemical and pharmaceutical factory in Böblingen. Eight years later, he passed an exam verifying his scientific and practical knowledge of chemistry. After pursuing further chemistry studies at the Universities of Erlangen and Tübingen and teaching at schools in England, France, and Germany, he accepted a position in 1828 at the University of Basel, Switzerland, where he would remain for the rest of his career.

Schönbein's discovered ozonein the late 1830s, while he was doing experiments on the electrolysis of water. He noticed a distinctive odor, similar to the smell following a bolt of lightning. In 1839 he succeeded in isolating the new chemical and named it from the Greek word ozein, meaning 'to smell'.

Another of his discoveries, guncotton, came about by accident: In 1845, while using his wife's cotton apron to clean up a chemical spill containing nitric and sulfuric acids, then rinsing it out and hanging it to dry, Schönbein saw it spontaneously ignite. Nitrocellulose, the highly flammable compound that was created, found many practical uses, among them in munitions and flexible films. When dissolved in ether, nitrocellulose forms collodion, which was used in medical dressings and early wet-plate photography.

Schönbein is also credited with making the first observation of the fuel-cell effect in 1838; it was his friend William Robert Grove who would create the first prototype fuel cell in 1845.