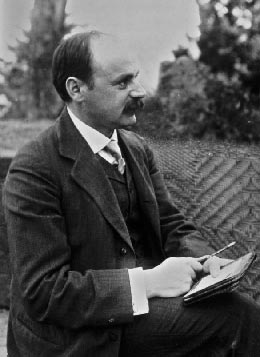 Karl Schwarzschild was a German mathematician and astronomer who predicted the existence of black holes.

Schwarzschild, who became director of the Potsdam Observatory in 1909, did important practical work, establishing a method for determining the brightness of stars from photographs by comparing their visual and photographic magnitudes to obtain their color index. However, his lasting contributions are theoretical and were made during the last year of his short life. In 1916, while serving on the Russian front, he wrote two papers on the recently published general theory of relativity, one of which develops the idea that the gravitational field of a collapsing star could become so intense as to prevent the escape of light. The boundary of such an object is defined by the so-called Schwarzschild radius.

Karl was the father of another famous astronomer, Martin Schwarzschild.

The Schwarzschild radius is the critical radius, according to the general theory of relativity, at which a body under the influence of its own gravitation becomes a black hole. Alternatively, it can be defined as the radius of the event horizon of a spherical black hole, from within which the strength of gravity is so strong that light cannot escape. Named after Karl Schwarzschild, it is given by Rs = 2GM/c2, where M is the mass of the body, G is the universal constant of gravitation, and c is the speed of light. For the Sun, Rs = 2.5 kilometers; for Earth Rs = 0.9 centimeter.