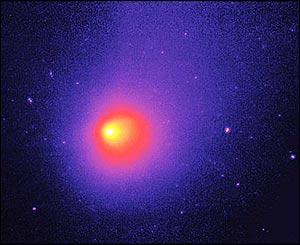 Comet Schwassmann-Wachmann 1 (Comet 29P/) is a short-period comet with an unusual, nearly circular orbit between Jupiter and Saturn, which is prone to occasional, unexplained outbursts in brightness of about 5 magnitudes (a factor of 100) over a few days. It was discovered in 1927 by the German astronomers (Friedrich Carl) Arnold Schwassmann (1870–1964) and Arthur Arno Wachmann (1902–1990).