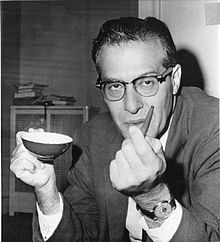 Julian Schwinger was an American physicist who shared with Richard Feynman and Shinichtiro Tomonaga (1906–1979) the 1965 Nobel Prize in Physics for his independent work leading to the theory of quantum electrodynamics (QED). Schwinger published his first physics paper at age 16, and received a PhD by age 21. During World War II, he developed important methods in electromagnetic field theory, which advanced the theory of wave guides. Schwinger also conducted research on synchrotron radiation, a type of electromagnetic radiation emeitted by charged particles in circular orbits. His variational techniques were applied in several fields of mathematical physics. In the 1940s he was one of the inventors of the "renormalization" technique. In 1957, he theorized that there were different neutrinos: one associated with the electron and one with the muon (verified experimentally in 1962.)