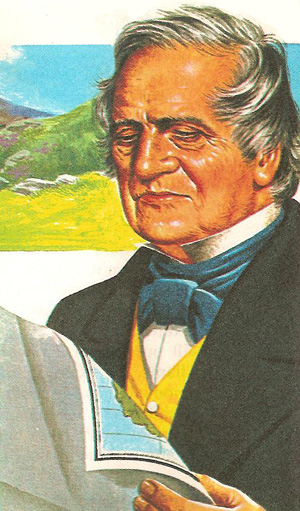 The entrance to the Sedgwick Museum at Cambridge.

Adam Sedgwick was one of the founders of modern geology. Born at Dent, Yorkshire, England, Sedgwick graduated from Trinity College, Cambridge, and embarked on a career in the Church, becoming a lecturer in theology. In 1818 he was ordained a priest and, at about the same time, was offered the Chair of Geology in the University of Cambridge. Sedgwick accepted this honor with the remark "Hitherto I have never turned a stone; now I shall leave no stone unturned."

He spent more than fifty years as Professor of Geology and during this period worked hard to establish the subject on a sound, scientific basis. He took a leading part in the Cambridge Philosophical Society.Most of his writings are to be found in the records of these societies. His most important contributions are those concerned the Paleozoic rocks of Britain.

Some of Sedgwick's early work was done in the Lake District close to his home. By paying close attention to the nature of the rocks, and by careful mapping, he was able to follow the changes that had taken place and to work out the original structure of the area. After this, he turned his attention to North Wales.

For hundreds of millions of years the rocks of North Wales have been subjected to earth-movements, volcanic activity, and erosion. They have been altered and contorted to much by heat and pressure that it is difficult to make out their original structure. Before Sedgwick's time, the rocks of much of Wales, the Lake District, and Scotland were labelled "Transition" rockers. Werner gave them this name because they appeared intermediate in character between the "Primitive" rocks (granites, etc.) and the layered rocks (sandstones, limestones, etc.). We now call the "Transition" rocks the Lower Paleozoics: Sedgwick was the first to study them in detail.

Sedgwick found the base of the "Transition" rocks lying on a platform of "Primitive" rocks. Again, by paying close attention to details of faults and changing rock types, he was able to unravel the history of the area, and produce accurate maps. He named the rocks with which he worked Cambrian, after Cambria, the Roman name for Wales.

Sedwick was not primarily interested in fossils but he understood their value and kept all those that he found for identification. many of them bear his name. When these fossils were compared with those found by Murchison further south, it was tealized that there were threee distinct populations. The "Transition" rocks thus became divided into Cambrian, Ordovician, and Silurian systems.

Throughout his life Sedgwick maintained his religious connections and was, for some time, Canon of Norwich. This may have been responsible for his strong opposition to Darwin's theory of natural selection and origin of species. Sedgwick's name is remembered in the Sedgwick Museum at Cambridge, which opened in 1904, and the Sedgwick Club in the University of Cambridge.