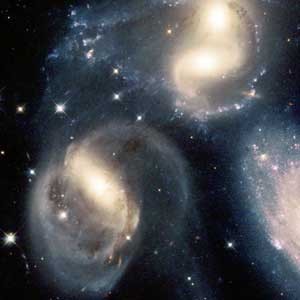 Stephan's Quintet is a highly disturbed cluster of five peculiar galaxies – NGC 7317, NGC 7318A, NGC 7318B, NGC 7319, and NGC 7320 – lying about 250 million light-years away in the constellation Pegasus, which show signs of gaseous connecting bridges and (in three of the objects) of strong tidal distortions due to gravitational interaction. Bright new stars clusters and dwarf galaxies have been born as a result of the melee.

Four of the galaxies have large redshifts, corresponding to recession velocities of 5,700 to 6,700 km/s; however, the fifth member (NGC 7320) has a much smaller redshift equivalent to a line-of-sight recession of only 800 km/s. This anomaly has led a few astronomers to question the validity of the cosmological explanation (see discordant redshift). However, the lower redshift system is almost certainly a foreground object that is unconnected with what should properly be called Stephen's Quartet.