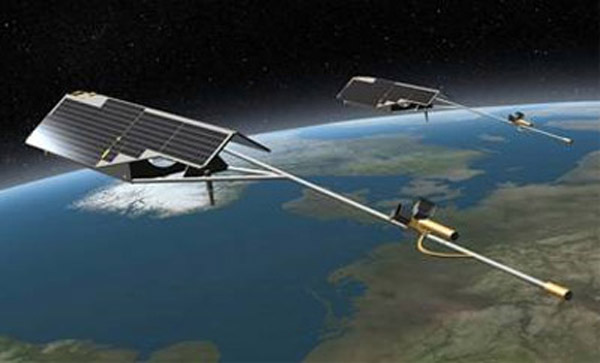 Artist's impression of the Swarm A and B.

Swarm is a European Space Agency mission, launched in 2013, which consists of three identical satellites designed to study Earth's magnetic field in greater detail than ever before. Swarm builds on the observations made by the earlier Oersted and CHAMP missions.

The high-precision, high-resolution measurements of the strength, direction, and variations of Earth's magnetic field made by the satellites will be used, among other things, to shed light on the dynamics of Earth's core, interactions between the core and the mantle, magnetization of the lithosphere, currents flowing in the magnetosphere and ionosphere, and ocean circulation (using its magnetic signature).

Each spacecraft carries the following instruments: