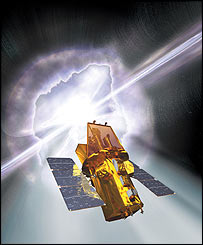 The Swift Gamma-Ray Burst Explorer was a NASA MIDEX (medium-scale Explorer) probe designed to measure the position, brightness, and physical properties of gamma-ray bursts – the most powerful energy blasts in the universe. Because the bursts are fleeting and unpredictable, Swift has been designed to detect and point, collect images and measurements, and send data back to Earth all within about a minute. During its three-year mission, Swift was expected to record more than 1,000 gamma-ray bursts. It was launched by a Delta rocket from Cape Canaveral in November 2004.