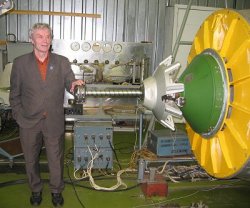 Vladimir Syromiatnikov was the designer of one of the most successful pieces of space hardware used by the Soviet Union, the docking collar used to link two spacecraft together. It was adapted for use in the Apollo-Soyuz Test Project in 1975, successful in more than 200 dockings of Soviet/Russian missions, and is now used aboard the International Space Station. Syromiatnikov was educated at Bauman Technical University in Moscow and went to work with RKK Energia of Kaliningrad upon his graduation in 1956.