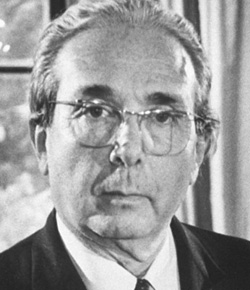 Leo Szilard was a Hungarian-born US physicist largely responsible, with Enrico Fermi, for the development of the US atom bomb (see Manhattan Project). In 1945 he was a leader of the movement against using it. Later he made contributions in the field of molecular biology, having abandoned physics after the use of the A-bomb in World War II.

In his early work, Szilard established a relation between information transfer and entropy (the degree of disorder or randomness of a system). He devised a means of separating isotopes of artificial radioactive elements, developed the chemostat (a type of culture vessel in which organisms are grown), and proposed theories of aging, recall, and memory.