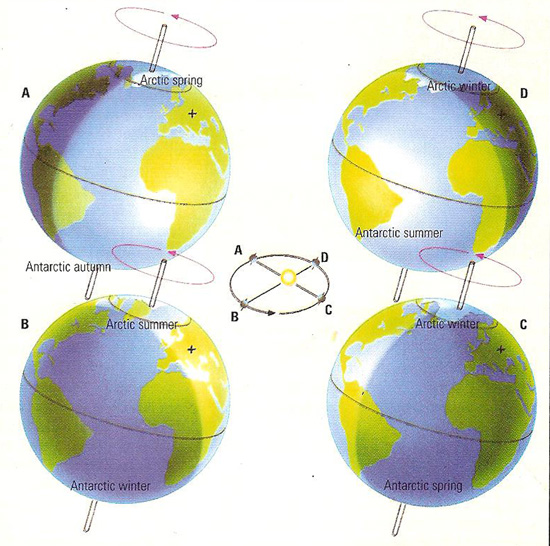 Spring in the Northern Hemisphere at the spot marked by a cross on the globe commences on the equinox of March 20/21 (A), when day and night are equal in length, and is followed by the summer solstice on June 20/21 (B) (the dates vary because of leap years), when the North Pole is at its closest to the Sun and the day is the longest of the year. Autumn equinox commences on 22/23 September (C), when day and night are once again equal in length. Winter in the Northern hemisphere begins on 21/22 December (D), when the day is shortest in the the year.

Seasons are any of the four climatically different periods of the year that arise because of the tilt of Earth's rotational axis relative to the orbital plane. The fixed tilt means that, at any given location, the altitude of the Sun and the length of daylight hours, changes on an annual cycle. The effects of these differing amounts of solar heating are most pronounced at high latitudes. The four seasons are astronomically defined by the different positions of the Sun with respect to the equator. In the Northern Hemisphere, spring is measured from the vernal equinox (21 March) to the summer solstice (22 June), summer from the summer solstice to the autumnal equinox (23 September), autumn from the autumnal equinox to the winter solstice (22 December), and winter from the winter solstice to the vernal equinox. In the Southern Hemisphere, the seasons are reversed.