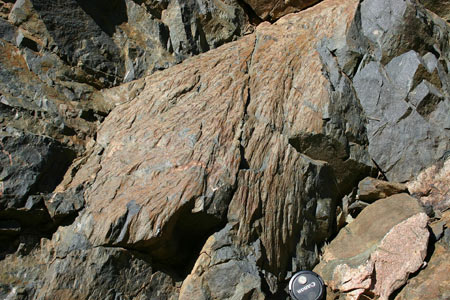 A shatter cone is a conical fragment of rock with regular thin grooves (striae) that radiate from the top (apex) of the cone. Shatter cones range in size from less than one centimeter to more than one meter across and are formed as a result of the high pressure, high velocity shock wave produced by an impacting meteorite. The exact mechanism of formation, however, is not well understood, and only nuclear tests generate enough heat and pressure to even roughly mimic the process; the first man-made shatter cone was produced in 1959 during an underground nuclear explosion. Years of hunting for and mapping of natural shatter cones and their orientations have revealed that the apex of the cones, from all sides of an impact site, point to the exact center of impact. Consequently, in the early 1960s shatter cones and impact minerals were both considered adequate criteria for suggesting an impact site.