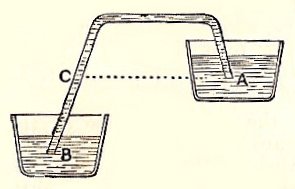 A siphon is a bent tube for drawing off liquid from one container to another. When in action the tube must be itself full of the liquid, so that the quantities of liquid in the two containers form one continuous liquid mass. In accordance with the principles of hydrodynamics, there will be, in these circumstances, a flow of liquid along the tube until either the free surfaces of liquid in the two containers are brought to the same level, or the one vessel of the siphon becomes emptied of liquid. If the goal is merely to empty one container, a second vessel is not necessary.

The principle on which the siphon acts can be understood with reference to the diagram. The two free surfaces are at atmospheric pressure, but are at different levels. Consider C, which is at the same level as A. The pressure at A is obviously greater than the atmospheric pressure, while the pressure at C is less than the atmospheric pressure by the amount of pressure due to the column of liquid between C and the free surface in the lower container. Hence there must be a flow of liquid from A to C along the tube – i.e. from vessel to vessel. In the upper part of the siphon the liquid is sustained by the pressure of the atmosphere on the free surface, just as in the barometer. If then the siphon reaches higher above the free surface than the height of the barometer-column of liquid used, the continuity of liquid will be broken at the bend, and the siphon will cease to act. Thus a siphon for water cannot be higher than about 1000 cm (33 ft) above the water surfaces; and a siphon for mercury is similarly limited to 76 cm (30 in). To bring it into working condition, a siphon is usually filled by suction applied (either by mouth or a pump) at the one end, the other end being immersed in the liquid; or it is first filled with liquid and then placed in its proper position.