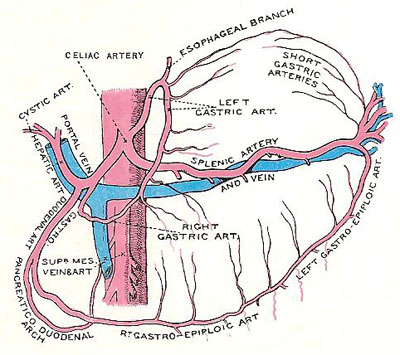 Celiac artery and its branches including the splenic artery.

The splenic artery is a very wide vessel, and is the widest branch of the celiac artery. It runs a very wavy course toward the left and slightly upward, along the upper border of the pancreas, behind the lesser sac and the stomach to the front of the left kidney; it then passes into the lieno-renal ligament, in which it breaks up into five or six terminal splenic branches that enter the spleen through its hilum. It is a very important posterior relation of the stomach.


Branches of the splenic artery

Besides the splenic branches, it gives off pancreatic and short gastric branches and the left gastro-epiploic artery.

The pancreatic branches are small twigs that arise as the artery runs along the pancreas.

The short gastric arteries are five or six slender arteries that arise from the splenic trunk and its terminal branches. They run in the gastro-splenic ligament to the upper part of the stomach.

The left gastro-epiploic artery is a long branch that arises from the splenic trunk or from one of its terminal branches. It first runs in the gastro-splenic ligament toward the stomach; it then passes into the greater omentum, and runs toward the right between its anterior two layers near the lower border of the stomach; and it ends by anastomosing with the right gastro-epiploic artery. It sends a few small branches down into the greater omentum, and numerous branches upward to both surfaces of the stomach.

The veins that correspond to the branches of the splenic artery end in the splenic vein, which is a little lower than the artery, behind the pancreas.