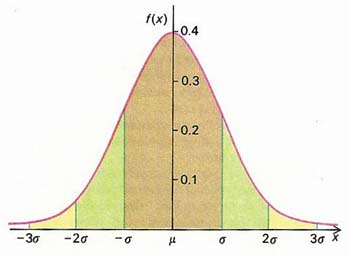 Over 68% of a population exhibiting a normal distribution for some property lie within one standard deviation (σ) of the mean (μ). Over 95% lie within μ±2σ and over 99% within μ±3σ. The total population in this example is unity (1).

where n is the number of observations, μ is the mean, and xi the ith value.

In a normal or Gaussian distribution, about 68.3% of the population lies within one standard deviation of the mean.