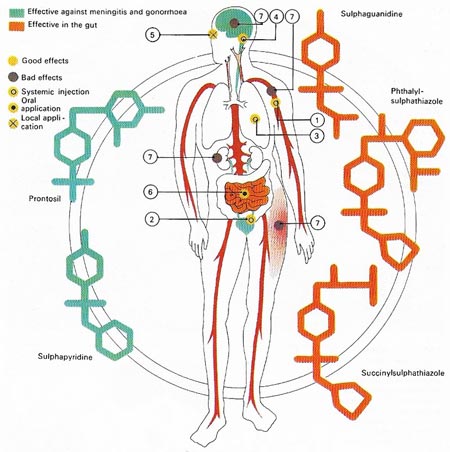 The sulfa drugs act by preventing the multiplication of bacteria and so give the body's natural defenses the chance to overcome them. The drugs combat blood (1) and urinary tract (2) infections, pneumonia (3), meningitis (4), eye infections (5), and alimentary tract (6) infections such as bacillary dysentery. Overdoses (7) can produce skin rashes, raised temperatures, impaired kidney function and anemia.

A sulfonamide, also known as a sulfa drug, is any of a group of synthetic compounds (containing the –SO2NH2 group) that serve as antibacterials – inhibiting the multiplication of invading bacteria – thus allowing the body's cellular defense mechanisms to suppress infection. The first sulfonamide, sulfanilamide (Prontosil), was synthesized in 1908 and used widely as a dye, before, in 1935, Gerhard Dogmagk reported its effectiveness against streptococci. Later, it proved effective against several other bacteria including those causing scarlet fever, certain venereal disease, and meningitis. However, the use of sulfonamides was associated with a number of unpleasant side-effects, and, with the arrival of the less toxic and more effective antibiotics, they were gradually replaced. Today, their use is limited chiefly to urinary tract infections.