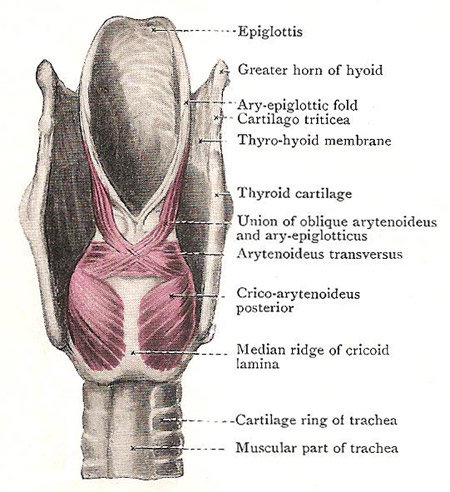 Muscles at the back of the larynx, thyrohyoid membrane shown.

The median thyrohyoid ligament is composed largely of elastic fibers. It is attached, inferiorly, to the sides of the deep, median notch on the upper border of the thyroid cartilage; it extends upwards, behind the body of the hyoid bone, to be attached to its upper border. The upper part of its anterior surface, therefore, lies behind the body of the hyoid bone; a synovial bursa is interposed between them to lessen friction when, in certain actions (e.g., swallowing), the upper part of the thyroid cartilage is pulled upwards behind the hyoid bone.

On each side of the median part, the thyrohyoid membrane is attached to the upper margin of the lamina of the thyroid cartilage, and stretches upwards, deep to the greater horn of the hyoid bone to be attached to its upper border. It is largely covered by the thyrohyoid muscle, and its inner surface is lined with the mucous membrane of the piriform fossa of the pharynx. It is pierced by the internal laryngeal nerve and superior laryngeal vessels.

The lateral thyrohyoid ligament, which forms the posterior border of the membrane on each side, is rounded and cord-like, and is composed chiefly of elastic fibres. It extends from the tip of the superior horn of the thyroid cartilage to the tip of the greater horn of the hyoid bone. In it there is usually developed a small, oval, cartilaginous (or bony) nodule termed the cartilago triticea.