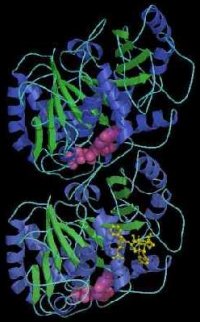 A model of tubulin developed by Berkeley Lab scientists, showing the protein to be a dimer consisting of two monomers that are almost identical in structure. Each monomer is formed by a core of two beta sheets (blue and green) surrounded by helices, and each binds to a guanine nucleotide (pink). In addition to a nucleotide binding site, each monomer also has two other binding sites, one for proteins, and one for another substance.

Tubulin is the protein from which microtubules are made. Tubulin is a heterodimer protein, meaning it is comprised of a pair of polypeptide chains, called monomers, that differ in the sequence of their amino acids. When tubulin polymerizes it does so into long chains or filaments that form microtubules – hollow fibers which serve as a skeletal system for living cells. The ability of microtubules to shift through various formations is what enables a cell to undergo mitosis or to regulate intracellular transport. The formation-shifting of microtubules is made possible by the flexibility of tubulin, which is why scientists have sought to understand the protein's molecular structure since its discovery in the 1950s.

Interest in tubulin structure intensified in the 1990s when taxol, a natural substance found in the bark of the Pacific yew tree (the name "taxol" has been trademarked by Bristol-Myers-Squibb), was shown in clinical tests to be an effective treatment for a number of cancers including ovarian, breast, and lung. By binding to tubulin and causing the protein to lose its flexibility, taxol prevents a cell from dividing. With better knowledge of tubulin structure and its interaction with taxol, scientists believe that an even more effective anti-cancer drug, one that interacts only with the tubulin of cancerous cells, may be synthesized. The detailed structure of the taxon dimer was announced by a team of researchers at the Lawrence Berkeley Laboratory in 1998 (see accompanying photo).