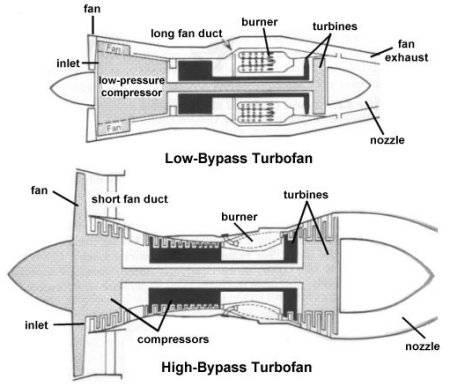 A turbofan engine is a type of jet engine which is similar to a turbojet but in which there is a fan section in front of the compressors. The fan, another rotating series of blades, is also driven by the turbine, but its main purpose is to force a large volume of air through outer ducts that go around the engine core. Although this "bypassed" air flow travels much more slowly, the large mass of air that is accelerated by the fan creates a significant additional thrust to that produced by the turbojet core without burning any extra fuel. Thus, the turbofan is much more fuel efficient than the turbojet. In addition, the low-speed air helps to cushion the noise of the jet core making the engine much quieter.