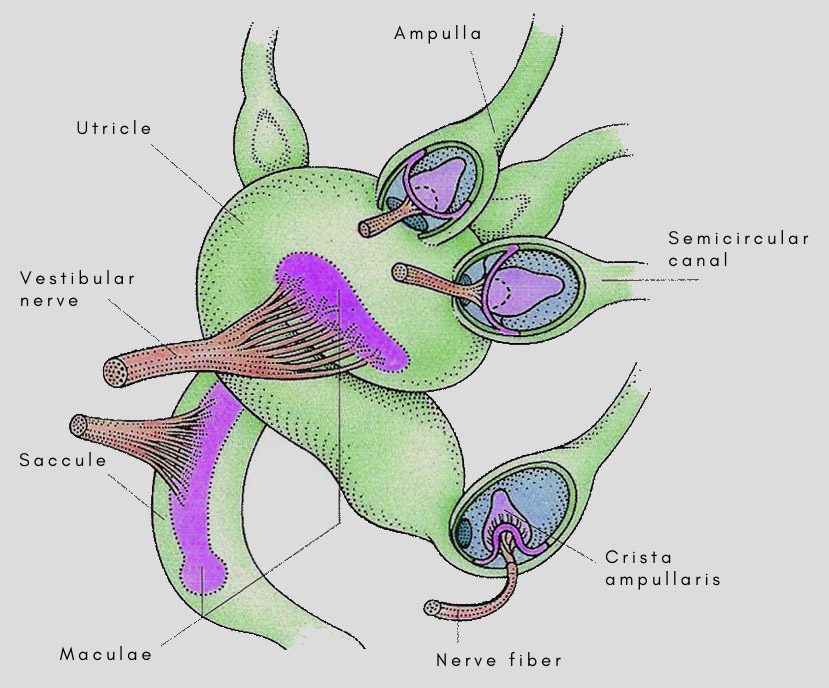 The vestibule is a fluid-filled cavity in the inner ear. It contains structures – the maculae and cristae – that detect the position and movement of the head..

The vestibular sense, also called the equilibrium sense, is the mammalian ability to remain upright in relation to the gravity and to detect changes in position and momentum. The principal organs of equilibrium are contained in the inner ear. Within the vestibule are two sacs, the utricle and the saccule, which transmit orientation information. Each contains a sensory patch, known as a macula, which registers the position of the head.

The semicircular canals are concerned with acceleration and deceleration. In the bulge, or ampulla, at the base of each semicircular canal is a receptor structure, known as a crista, which detects rotation of the head. Collectively, these systems help humans locate their bodies in space.

Maculae in the inner ear monitor the position of the head. They contain tiny hairs that project from sensory cells and are embedded in a gelatinous mass. If the head is tipped, gravity pulls the mass down, stimulating the hair cells.

The crista ampullaris, located at the end of each semicircular canal in the inner ear, responds to rotational movements. Each crista contains hair cells embedded in a conical geletinous mass known as the cupula. When the fluid in the semicircular canals swirls during movements, it displaces the cupula, stimulating the hair cells.