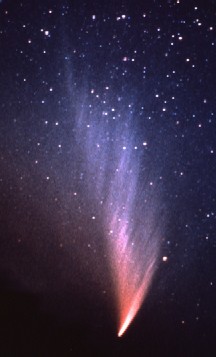 Comet West (C/1975 V1) was one of the brightest long-period comets of recent decades. Discovered in November 1975 by the Danish astronomer Richard Martin West (1941–), it brightened irregularly making it difficult to predict. It reached perihelion on February 25, 1976, and a few days later, its nucleus was seen to have split into four pieces. At its nearest point to Earth (0.80 AU) in early Mar, its magnitude was -1, its head was yellow, and its fan-shaped dust tail, up to 35° long, appeared dull red to the unaided eye.